What we learned in Pennsylvania on Tuesday 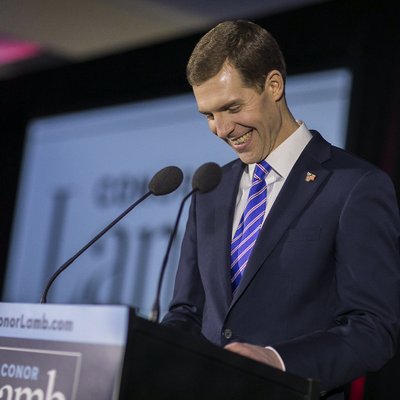 That’s 627 out of 228,378 total votes cast. Aside from edging out Saccone by 0.2%, Lamb’s upset victory was even more stunning because the 18th is a district that Donald Trump won in 2016 by nearly 20%. If a Democrat can retake a house seat there, it suggests that elections for more than a hundred House seats will be competitive this fall.

But Lamb’s margin of victory highlights how critical every vote may be in November. Lamb’s margin could have been larger if Pennsylvania actually allowed early voting (it doesn’t) or same-day voter registration (it doesn’t). And his slim victory likely wouldn’t have happened without aggressive get-out-the-vote efforts by groups like SwingLeft and Indivisible.

On the other hand, Lamb’s campaign likely would have fallen short if Pennsylvania had strict voter ID laws like those in Kansas and Wisconsin that disproportionately suppress the votes of students, low-income citizens, and minority voters. And had right-wing billionaires spent another million dollars on the race, maybe Saccone escapes with a narrow win.

Tuesday’s election results underscore why battles over election laws and voting restrictions matter. They have huge significance for the midterm elections and could make the difference in deciding which party controls Congress in 2019.

ACLU vs. Kris Kobach in Kansas

This week, the ACLU squared off in court against Kansas Secretary of State and Donald Trump’s favorite voter fraud conspiracy theorist Kris Kobach. In addition to being the point man on Trump’s disbanded and discredited voter fraud commission, Kobach led the fight for strict voting restrictions and voter ID laws in Kansas. The ACLU has challenged Kobach’s “documentary proof of citizenship” law in Fish v. Kobach this month.

The case isn’t going well for Kobach. His team struggled with basic rules of evidence. Kobach’s own witness disputed his (and Trump’s) groundless claim that illegal votes helped Hillary Clinton win the popular vote in the 2016 election. Another one of Kobach’s witnesses, purportedly there to testify that the new law was not burdensome, described a very complicated, difficult series of tasks required to prove her right to vote.

At the heart of the Kansas voter ID law, and dozens just like it in other states, is the false, repeatedly disproven argument that elections are threatened by massive attempts at voter fraud. In fact, shark attacks are more common than acts of voter fraud. And there are more instances of people being struck by lightning than people committing voter fraud at polling places.

But that hasn’t kept the GOP from using the myth of shadowy, sinister, lurking-in-the-dark voter fraud to justify a frenzy of voter ID laws. The “threat” of voter fraud is the ghost story many conservatives tell to scare people into passing bad laws that cost hundreds of thousands of Americans — most often African Americans, low-income people, and students — their right to vote.

1. Trump’s troops at the polls?

This doesn’t sound good: “President Trump would be able to dispatch Secret Service agents to polling places nationwide during a federal election, a vast expansion of executive authority if a provision in a Homeland Security reauthorization bill remains intact.” (Annie Linksey, Boston Globe).

2. Where did millions of Obama voters go?

Check out this fantastic editorial about America’s low voting rate, why it’s worse than many other democratic nations, and what we might do to change it. (New York Times)

4. It’s kinda like a conspiracy, except they’re doing it in the open

A look the GOP’s not-so-subtle efforts to undercut and suppress African-American votes. “With crucial midterm elections coming up later this year, Republicans continue to use a landmark Supreme Court decision on the constitutionality of the Voting Rights Act of 1965 to clamp down on voting rights and access.” (Sarah Okeson, Salon)

5. Four ways Washington State is making it easier to vote