The gerrymandered firewall for the GOP, a creative new way to avoid Wisconsin voters, and ERIC, the vote-stealing computer

A report this week from the Brennan Center, one of the leading authorities on voting rights and election law, offered a sobering take on the prospects of the Democrats to take back the U.S. House of Representatives this Fall, given the huge obstacles posed by extreme gerrymandering in many states. Extreme Gerrymandering and the 2018 Midterms suggests that despite favorable polling and measures of voter enthusiasm, the elections this Fall may not change control of the House, even if Democrats win by the 7% margin they currently show in nationwide polls:

With a solid lead in national polls and a string of special election victories, Democrats are optimistic about their chances of winning control of the House this fall. But… the impact of extreme gerrymandering could severely hamper those efforts. Democrats would need a near-record 11-point national margin or a series of extraordinary breaks to win the narrowest of majorities in the chamber.

How rare is an 11-point national margin? It hasn’t happened since 1982. Impossible? No. Unlikely? Yes. Cue sad trombone music if you’re hoping for a change of control in the House this Fall.

But wait — Fivethirtyeight‘s data “whiz kid” Harry Enten isn’t quite as pessimistic, arguing that the Brennan Center’s analysis focuses too much on state data, rather than looking race-by-race. His breakdown also suggests that the Democrats will need to win by a substantial margin to overcome gerrymandering, but by not quite as much: 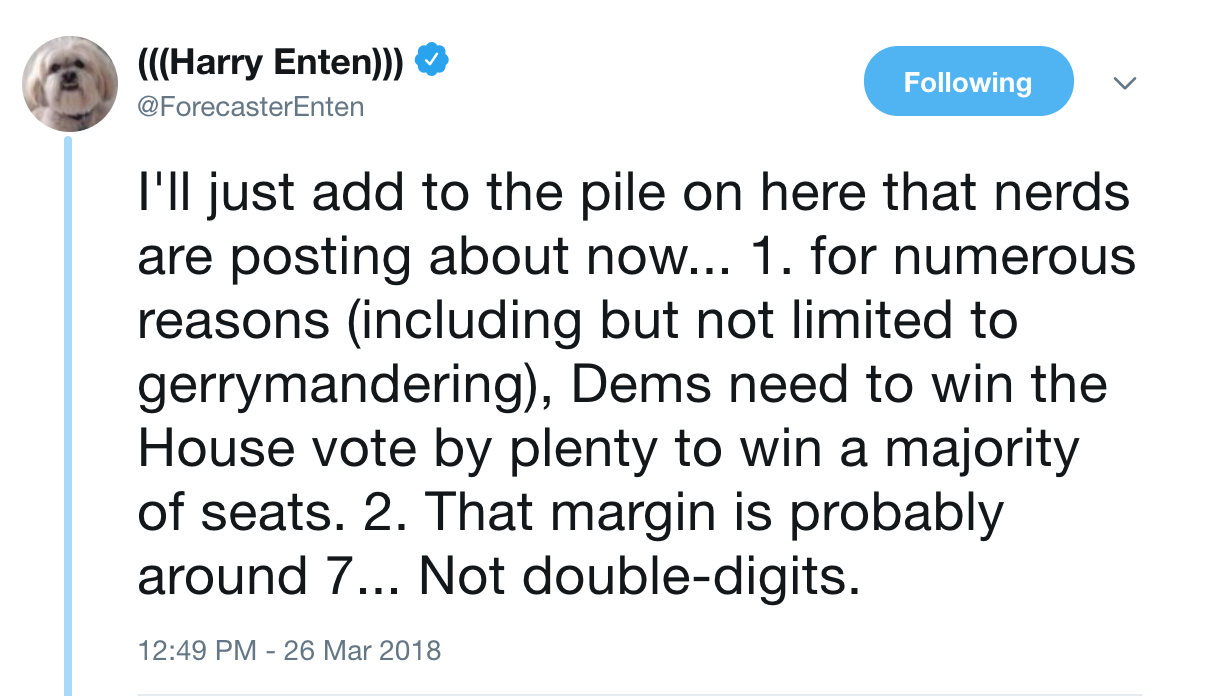 Dave Wasserman of the Cook Political Report is also skeptical of the Brennan Center’s grim prognosis, agreeing with Enten that Democrats would need to win by about 7% to take back the House.

Still, the fact that election experts across the board agree that the Democrats need to not only win more votes than the GOP, but win by 7% to 11% to retake the House of Representatives, speaks volumes to how skewed the electoral landscape has become as a result of gerrymandering. The deck is stacked; the only argument is by how much. Ok, yeah, let’s cue that sad trombone music.

Last week, I wrote about how a judge ordered Wisconsin Governor Scott Walker — brilliantly described by Esquire‘s Charles Pierce as “the goggle-eyed homunculus hired by Koch Industries to manage this particular midwest subsidiary” — to stop procrastinating and hold special elections for two vacant state legislature seats. Within 30 minutes of hitting SEND on last week’s newsletter, news broke that Walker and his GOP minions had a new plan: rather than just finally holding elections and letting hundreds of thousands of citizens have representation in the state legislature, they’ll just change state law to change the requirement that they hold elections for the vacant seats.

This is a) the kind of thing you can do if you have total control over state government thanks to extreme gerrymandering and b) what you do if you really really really don’t want to let the voters decide who should represent them.

Finally on Thursday, facing a huge public backlash to this outlandish plan, along with another round of legal challenges, Walker relented and announced special elections for June 15. Wisconsin voters will have the chance in 77 days to make their voices heard.

One of the top stories this week is the not-so-subtle effort by the Trump Administration to add a citizenship question to the 2020 census. The question was added against the advice of career staff at the census department who warned that the question would suppress and discourage participation by non-citizens, leading to inaccurate results in many states. The census has historically been a measure of the total population, not only citizens.

The flimsy rationale for adding the citizenship question — which hasn’t been asked in a census in nearly 70 years — is that it would help the Justice Department “protect all American citizens’ voting rights” under the Voting Rights Act. This seems laughable, given the fact that the Justice Department under Trump has retreated from enforcing voting rights: cutting enforcement staff, reversing course on the Texas voting rights case, and enforcing civil rights cases at the lowest rate in 17 years. So the rationale is nonsense, but the end result is likely right in line with the administration’s anti-immigrant ideology. As Luke Darby put it in GQ this week: “if the administration can’t actually stop the increasing racial diversity in the U.S., they can use the census to present a fake America that preserves white, conservative political power.”

Nobody is doing better reporting on voting rights than Ari Berman, who writes for Mother Jones and Rolling Stone. This week he tackles the GOP’s fight to preserve their gerrymandered majorities as well as Trump’s attempt to skew the Census to undercount minorities and over-represent whites in Congress. His book, Give Us the Ballot, is one of the best, in-depth looks at challenges to the vote. If you don’t have time to read that, check out his recent big-picture article in Rolling Stone, How the GOP Rigs Elections.

3. The Supreme test on the horizon

Gerrymandering is under review in two cases before the Supreme Court, and it seems likely they will rule this summer, which will have a wide-ranging impact across the country. The Roberts court has rarely sided in favor of protecting voting rights, so there’s plenty of reason for pessimism. But if Justice Anthony Kennedy, who was on the fence in 2004 when the court ruled 5-4 in Vieth v. Jubelirer against interfering in a gerrymandering case, can be persuaded, the Supreme Court might rule against extreme political redistricting.

As if Wisconsin didn’t have enough problems, a computer system called the Electronic Registration Information Center, ERIC for short, mistakenly purged at least 44,000 people from the voting rolls in Milwaukee. Mayor Tom Barrett is working to get them restored. No word yet from ERIC.