Make it easier for everyone to vote? 39% say no. 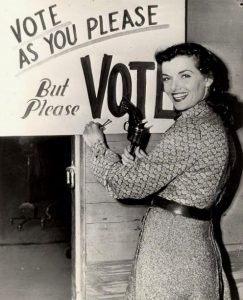 A recent Pew Reseach Center survey showed that while 59% of Americans polled support the idea that “everything possible should be done to make it easy for every citizen to vote,” 39% reject that idea and believe that “citizens should prove they want to vote by registering ahead of time.”

Dig deeper, and the poll shows that 63% of Republicans took the hard-line position on voter registration (“You want to vote? PROVE IT!), while 84% of Democrats and 57% of Independents support the “make it easy for every citizen” position.

This stark polarization on the basic idea of voting rights begs the question: which came first? Do GOP leaders impose voting restrictions to satisfy a conservative base that believes in making it harder for people to vote? Or do Republicans support voting restrictions because Fox News and GOP leaders have fed tall tales about voter fraud and stolen elections? We may not be able to figure out the chicken-and-egg mystery of the Right’s distrust of higher voter participation, but this survey suggests that the wave of voter suppression efforts in the past two decades isn’t the result of a few zealous politicians or a handful of rogue state legislatures — it’s an idea supported by nearly two-thirds of Republicans.

This week, Slate’s Jamelle Bouie suggests that “states would do well to extend the franchise to 16-year-olds.”  Some states — Arizona, Delaware, Hawaii, Michigan, and New York — and the District of Columbia are already considering it. Bouie makes a compelling case, suggesting that “today’s 16-year-olds are as qualified to vote as the 18-year-olds of 50 years ago. And seeing as how they’re already fighting to change the world, they deserve it.”

The Washington Post has a great feature this month on mega-donors who are pouring tons of their wealth into the 2018 midterm elections. Consider this: in the 1960 Presidential Election, the Kennedy and Nixon  combined spent $19.9 million dollars. In 2018, a single conservative mega-donor, Richard , has spent (so far) more than $20 million in support of Republican candidates in the midterm elections. A single billionaire has outspent the entire 1960 presidential election himself on the 2018 midterms — and it’s only April. This is the new world of campaign spending, thanks to the Supreme Court’s Citizens United ruling.

Kansas Secretary of State and would-be Governor Kris Kobach was found in contempt of court this week for refusing to comply with a court order to notify thousands of Kansans that they were registered and eligible to vote. Man, this guy REALLY hates to encourage more people to vote, legally or not. I think I have a hunch how he would have answered that Pew Research survey…

4. Suppressed the vote and happy to brag about it

Wisconsin Attorney General Brad Schimel — one of the architects of his state’s voter restriction laws enacted in 2011 — went on the WISN radio this week and bragged that the voter ID laws helped elect Donald Trump and Republican Senator Ron Johnson:

“How many of your listeners really honestly are sure that Senator (Ron) Johnson was going to win re-election or President Trump was going to win Wisconsin if we didn’t have voter ID to keep Wisconsin’s elections clean and honest and have integrity?”

The “clean and honest” part of that is based on the myth that somehow, before 2011, Wisconsin’s elections were riddled with voter fraud and corruption. Maybe Chicago Bears fans were sneaking across the border with fake ID’s to vote dozens of times across the state for Barack Obama?

The reality is that Wisconsin’s voter ID laws kept nearly 17,000 registered voters from being allowed to vote in 2016. More than 300,000 registered Wisconsin voters — mostly low income and minority citizens — are estimated to have lacked a photo ID in 2016. It is unknown how many of those didn’t try to vote due to the laws. Overall voter turnout was down across Wisconsin in 2016 — another likely result of Wisconsin’s new laws.

Schmiel no doubt got the result he wanted in 2016, but considering he took away the legal right to vote from tens of thousands of people in his state, maybe not a good idea to go on radio and brag about it?