What Ohio got wrong, what Connecticut got right, and the $430 billion on the way to buy your local election

The biggest voting rights news this week is that on Tuesday, Ohio voters, by a three-to-one margin, overwhelmingly approved Issue 1, a ballot initiative designed to reform how congressional districts are drawn.

Issue 1 was supported by Common Cause Ohio, the League of Women Voters of Ohio, the NAACP, and dozens of other groups. Advocates say it will replace the one-sided partisan gerrymandering process with one that “includes bipartisan mapmaking, greater transparency, and public participation.”

Ohio is one of the states most in need of gerrymandering reform. The average margin of victory in Ohio’s 2016 congressional races was 36%. Do you suppose that’s because Ohio has the 16 best congresspeople in America? Or because the maps are rigged to protect them from accountability to voters? Ohio gerrymandering effectively has locked in most of its congressional seats for Republicans, leaving almost no competitive districts for each election. Ultimately, this makes a huge difference because you wind up with 16 members of Congress who feel no pressure from their constituents, which isn’t how representative democracy is designed to work.

So the victory of Issue 1 on Tuesday is progress. It shows that voters can and will support changes to the law to promote more fair elections. Hopefully, it will inspire more states to follow Ohio’s lead and attempt to remedy partisan gerrymandering through ballot initiatives.

Still, at the risk being cynical and skeptical on a lovely sunny Friday, I’m not sure how much difference this will really make.

On the surface, Issue 1 seems like a positive step forward, but when you look closer at the actual process approved, we shouldn’t be doing cartwheels for democracy just yet. Unlike some states like California, Iowa, and Arizona, where redistricting is handled by an independent commission, Issue 1 largely leaves legislators in charge of drawing their own districts.

Issue 1 was a compromise between the Republican-controlled Ohio General Assembly and Fair Districts = Fair Elections, and its flaws are a reason that the ACLU opted not to support it.

After Issue 1 is enacted in 2021, partisan gerrymandering will still be possible in Ohio, but it’s going to be more difficult. The process is convoluted and complicated, but essentially, after three steps that encourage bipartisanship, the fourth step would still reward a party in control for rigging the maps in its favor:

Finally, if all these efforts fail, the legislature would be permitted to pass a map with simple majority support. But the catch is that this new map would only last four years, rather than the usual 10. And again, the governor’s signature would be required.

So, in other words, if the Republicans maintain control of the state General Assembly, which is entirely possible — if not likely — and if a Republican is elected governor, also very possible, they can continue to gerrymander the shit out of Ohio.

Is it an improvement over the status quo? Absolutely. But it’s an improvement in the same way that you’d rather be bitten by a Labrador than mauled by a grizzly bear. It’s still not good, but it’s a little less painful.

The voters will have their say in November in the midterm elections. But before that, billionaires will spend a lot to try and sway those elections in their favor. After all, they invested a lot of campaign money in 2016 and just got massive tax breaks as a highly profitable reward.

This week, GOP mega-donor and Las Vegas casino mogul Sheldon Adelson wrote a $30 million check to help Republicans defend against a Democratic House takeover. That may be just an appetizer compared to the Koch Brothers, who plan to spend $400 million on the midterm elections through their vast network of right-wing organizations. (Does it make me a hopeless dreamer to imagine what else these tycoons could fund with $430 million dollars? Medical research? College scholarships? Low-income housing?)

Time will tell if all this money makes enough of a difference. In the March Pennsylvania special election, right-wing donors outspent democratic donors six-to-one, but still lost. They spent $93.14 per vote in the 18th district to support Rick Saccone, compared to supporters of Conor Lamb, who spend $14.75 per vote.

2. Connecticut agrees to give its electoral college votes to whoever wins the national popular vote in future Presidental elections.

Connecticut joints 10 other states and the District of Columbia in joining the National Popular Vote Interstate Compact that commits it to give its electoral college ballots to the winner of the popular vote, not the electoral college. This is progress. (Dominique Mosbergen, Huffington Post)

3. “Gerrymandering can be good. People just aren’t doing it right.”

Check out this excellent video posted on the Washington Post this week challenging the common take that all gerrymandering is bad. 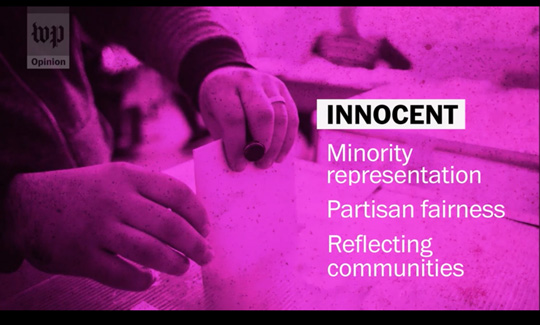 If you don’t have 4:33 to spare, his argument comes down to: “It’s not about what the districts look like, it about who’s in them.” Definitely worth a watch. (Robert Gebelhoff, Washington Post)