Who are the “right people” to vote?

“The right people should vote”

Axios and SurveyMonkey did a poll earlier this month that sheds light on the differences between parties on voting rights. Overall, 62% of Americans surveyed, and 79% of Democrats, said that “government would function better if more people voted.” But a majority of Republicans surveyed believe that “the right people should vote so the best leaders are chosen.”

Check out this chart: 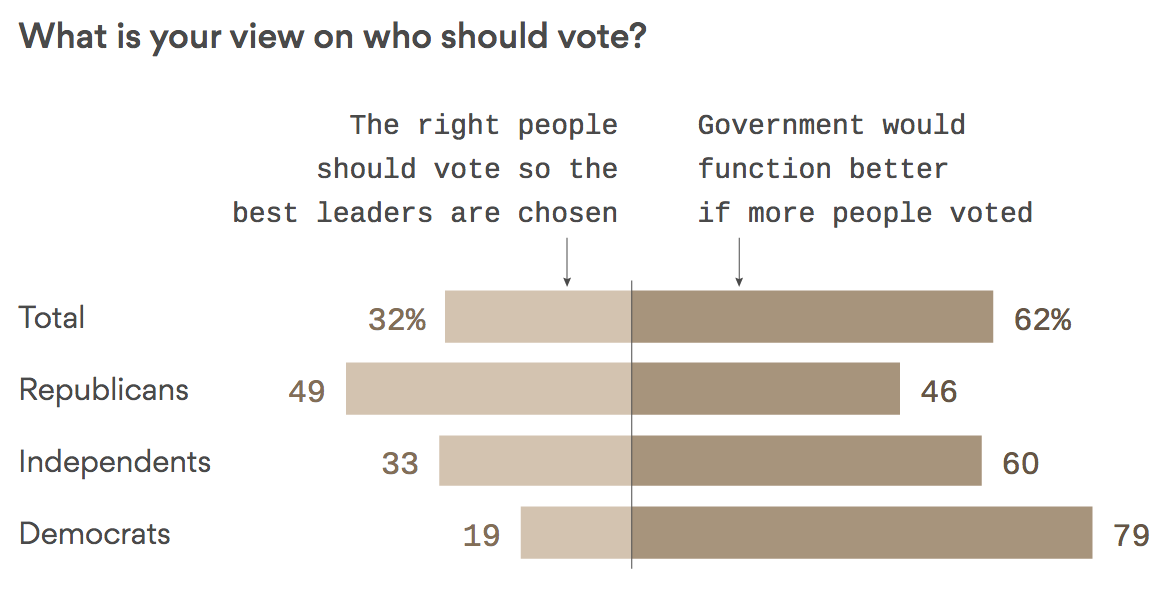 So who, exactly, are “the right people?” More importantly, who are the “wrong” people? You can speculate for yourself who that majority of Republican voters are thinking about.

But the next time you wonder why the GOP fights so hard for more restrictive voter registration and voting rules, think about this chart. It’s not much of a puzzle. Read the rest of the article at Axios.

1. Colorado hops on the anti-gerrymandering train

Another state will let voters decide this November if they want to put into law changes that will overhaul how congressional districts are decided. It may not be perfect, but it will undoubtedly be an improvement over Colorado’s traditionally partisan gerrymandering battles. (Corey Hutchins, Colorado Public Radio)

But that doesn’t mean it can’t still have its share of issues. Your absentee vote might get voided in California if your signature doesn’t match the one on your voter registration. (If so, all my votes would get tossed — my signature varies widely depending on my current caffeine level, how behind I am on my to-do list, or whether I’ve recovered from the latest episode of This is Us.)

Meanwhile, San Diego, Santa Ana, and Santa Clara are all being challenged over violations of voting rights.

Not surprising, but another layer of evidence that 2016 was a dumpster fire for American democracy.

4. Louisiana is about to restore voting rights to felons

How about we close this week on a positive note?

This week, the Louisiana House passed a bill that would restore voting rights to convicted felons still serving probation and parole, but out of prison for five years. Governor John Bel Edwards has said he will sign the bill.

This may not remake the political landscape in Louisiana or America, but it will mean a great difference to thousands of men and women who served their time in prison and are trying to rebuild their lives.

As Representative Katrina Jackson put it: “How long do you punish someone for a wrong? It’s a funny thing about forgiveness. We want it, but we don’t often give it.” (Melinda Deslatte, Associated Press)